In addition to determining genotype results at markers within the DNA sequence that provide valuable information about health and traits, each sample is also tested for a set of 120 markers which establish a unique ID, or fingerprint for your cat. The identity markers are not listed on the results page, but are stored in Neogen's database for future reference. A report including these markers is available upon request.

DNA profiles of offspring and parents can be compared to confirm parentage between the tom or the queen individually, or for the entire group, or “trio” of tom, queen, and kitten. Based on the number of shared alleles, or inherited versions of the DNA sequence, a tom and/or queen can be either "QUALIFIED" or "EXCLUDED" as a parent. These results can provide proof of pedigree relationships and the analysis is included with the CFA basic panel when requested in the ordering process.

Cats have been found to have one blood group system which consists of different blood types, A, AB, and B. Each blood type refers to an antigen on the surface of the red blood cell. Cats with Type A blood have antibodies to the antigen on Type B red blood cells which can result in a severe reaction in the event of a blood transfusion or in the case of type A kittens born to a queen with type B blood which are affected with a condition called neonatal isoerythroloysis, a major cause of “fading kitten syndrome”. Mortality is high in these newborn kittens due to anorexia, lethargy and emaciation.

This test detects 2 mutations which are specific for the Type B blood type. These two mutations exist in a segment of DNA which is typically inherited as a “block” or “haplotype”. Because the mutations are typically inherited together, only one genotype result is reported. Occasionally in nature, recombination events occur which alter these “blocks” of DNA, in this case, the result for this test is “NR” for no result and a serologic test should be done to determine blood type.

Hypertrophic Cardiomyopathy (HCM) is a type of heart disease that results in thickening or “hypertrophy” of the heart muscle. HCM is the most common type of heart disease in cats and can be inherited or result from other predisposing health disorders. Mutations that predispose to HCM are reported for Ragdolls and Maine Coon cats.

Ragdoll: Inheritance of this mutation is suspected to be autosomal dominant and age of diagnosis for affected cats can vary widely, from kitten to adulthood.

Maine Coon (Add-on Test): This mutation is autosomal dominant, but has incomplete penetrance meaning that not all cats with the mutation will exhibit clinical symptoms. Penetrance for heterozygous cats (+/-) has been estimated at 30%, and penetrance for homozygous cats (+/+) has been estimated at 80% 12. For example, it is estimated that 80% of Maine Coon cats homozygous for this mutation will eventually develop disease, while 20% will not. The risk of disease with these mutations (disease penetrance) does increase with age.

Note: An additional mutation has been proposed in Maine Coon cats (A74T) 13, but other studies have disproved the initial finding 12,14. Detection of this mutation is not included in the CFA DNA test.

(MPS) is a group of lysosomal storage disorders in which a mutation causes the decreased function of a specific enzyme required to break down glycosaminoglycan’s (GAGs). The GAGs collect in cells, blood and connective tissues and cause abnormalities in appearance and function of body systems. Affected cats may have flat, broad faces, large heads, small ears, thick skin over the dorsal neck, wide cervical vertebrae and hip subluxation as well as other manifestations of the disease. Clinical signs of the disease are usually visible within the first few months of life.

MPS VI: A recessive mutation in the ARSB gene has been identified to cause the “Severe form” of MPS VI 2 (MPS6) in which affected cats are likely to exhibit clinical disease. An additional mutation was published for a "Mild form" of MPSVI, but was shown not to have any effect on outcome of clinical disease, and is not inlcuded in the test report at this time.

MPS VII: Multiple mutations have been reported in the GUSB gene 4, 5. Inheritance for both mutations is autosomal recessive.

Polycystic Kidney Disease (PKD) is an autosomal dominant inherited condition in cats is characterized by the development of fluid-filled sacs (cysts) in the kidneys. The cysts increase in number and size over time and overwhelm the ability of the kidneys to function properly resulting in renal failure. Cysts may be present at birth in affected cats, but disease may not be clinically evident until later, typically before 7 years of age.

CEP290 / rdAc This mutation can lead to “late onset” blindness. Cats homozygous for this mutation are born without evidence of clinical disease or detectable abnormalities in the eye during a clinical exam, the disease develops slowly over time. Lesions in the fundus can be observed by full-field flash electroretinography (ERG) as early as 8 months, and are visible via opthalmoscopic exam around 1.5-2 years. Loss of vision occurs slowly and typically the end stage of the disease is reached by 4-7 years of age.

CRX / Rdy The CRX mutation causes an “early-onset” disease with clinical signs evident by 4-5 weeks of age. Visual impairment is usually evident within the first 4 months of life. Inheritance of this disorder is autosomal dominant and the breeding of two carriers is likely to result in non-viable offspring.

Erythrocyte pyruvate kinase deficiency (PK deficiency) is a recessive inherited disease which was initially discovered in Abyssinian and Somali breeds, but can also affect random bred domestic shorthair cats. PK deficiency is caused by a mutation in the PKLR gene which encodes the pyruvate kinase enzyme. Without this enzyme, erythrocytes (red blood cells) break down easily in circulation resulting in an abnormally low level of these cells (hemolytic anemia). Clinical signs include severe lethargy, weight loss, jaundice, and abdominal enlargement.

Spinal muscular atrophy a recessively inherited genetic disorder in Maine Coon cats caused by a mutation in the LIX1 gene. The disorder results in the loss of neurons (nerve cells) that affect muscles in the limbs. The result is weakness and instability in posture and gait. By about 5 months of age muscle atrophy, or shrinking of the muscles in the legs is evident. Although physically debilitated, cats can survive into adulthood.

This test detects a mutation in the ASIP gene which affects how pigment is distributed in the hair shaft creating banded fur. The banded fur can alternate in various types of patterns with solid color which is called tabbying. Tabby pattern is not determined by this test.

The dilute phenotype results from an autosomal recessive mutation in the MLPH gene18. Coat colors are diluted as follows: 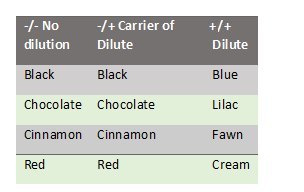 The TYRP1 gene has been found to be involved with the synthesis of eumelanin pigment, which results in a black/brown coloration. Variations of brown coat color are a result of mutations in the TYRP1 gene 19,20. The normal wild type allele is the dominant B allele, and cat homozygous for this allele at either position will be either black or dark brown in color. A mutation which affects a splice site of the TYRP1 gene (5IVS6) (b allele) is associated with a chocolate, or chestnut phenotype* and a mutation at the c.298C>T position is associated with a cinnamon, or light brown phenotype (bl allele). The individual must be homozygous for the b or bl allele in order to express a chocolate or cinnamon phenotype. Occasionally, cats will be heterozygous for both the cinnamon and brown mutations, resulting in a chocolate phenotype.

* Prior to June 2017, the mutation tested for the b allele was c.8 C>G. This marker is linked to the 5IVS6 marker, but occasionally results between the two different markers could differ. Ongoing research has supported 5IVS6 as the causative marker for the b allele associated with the chocolate phenotype.

Mutations in the gene which codes for the enzyme tyrosinase results in various forms of albinism due to the effects that the change in the enzyme has on melanocytes; the cells that produce melanin. Two of these mutations cause a temperature-sensitive phenotype in cats resulting in greater pigmentation (darker color) at the extremities (ears, paws) where the temperature is cooler 20,21. Cats with the Burmese phenotype have the greatest pigmentation at the extremities and less on the torso, while cats with the Siamese phenotype have pigmented fur only at the extremities, the torso is very light (or white), and the lack of pigment produces a blue eye color. There is an intermediate phenotype, Tonkinese, which describes an intermediate color gradient to the Burmese and Siamese phenotypes. There is also a 3rd mutation in this gene that results in a lack of pigment in the hair, skin and eyes which is very rare and recessive to the Burmese and Siamese phenotypes 22.